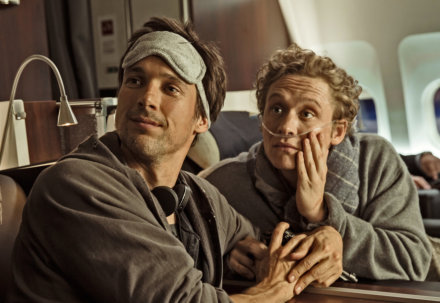 A tragicomic movie about two terminally ill young men on the road in South Africa has been one of the top 10 movies in Germany for most of 2016. According to the write-up for “Der Geilste Tag” (The Most Beautiful Day), writer/director Florian David Fitz “co-stars alongside the hugely popular German star Matthias Schweighoefer and the duo play young men who meet in the hospital where both are diagnosed with terminal illnesses. To make the most of the days that remain, they decide to get their hands on a lot of money and go out with a literal, pistol-generated bang at the end of a road trip through picturesque Africa.” While “Der Geilste Tag” got mixed reviews, it made $12 million in its first week at the end of February, outperforming the blockbuster “Deadpool”. In the next few weeks it was only outperformed by “Zootopia” and “Kung Fu Panda 3”, according to statistics on Box Office Mojo. It was still in the top 10 in mid-April. It had taken in over $14 million in eight weeks versus “Batman v. Superman”, which took in $16 million in four weeks. Not bad for a small movie.