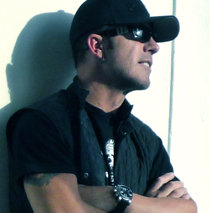 Born in Memphis, Tennessee, David immediately began pursuing a career as a small, hollering infant. He was an instant success, and decided to move to Hollywood to find an industry that rewarded infantile behavior. He found it: The Music Industry. After surviving a soul-charring stint in that sociopathic hellshow, he escaped to the relative safety of advertising. Along the way, David designed guitars for Motley Crüe, studied film at the Art Center, photography at Otis Parsons, and toured with Van Halen for four years as an Art Director…all without going to rehab. At the conclusion of his rock and roll career, David retired his mullet and began directing music videos, but soon switched to commercials after discovering that the catering was vastly superior.

“After working with Kim and her amazing team for two weeks on a highly ambitious shoot with dozens of actors and a jam-packed shot list, I am ecstatic with the result and a believer in The Network’s production approach.